The Nativity window is one of two that were commissioned by the church for the millennium. The Kirk session chose Nativity and Christ’s Baptism as the subjects and Roland Mitton a member of the British Society of Master Glass Painters designed them. They cost £4,000, so at Harry Cunningham’s suggestion, an equal sum was raised by the congregation and donated to charity. £2,000 wasgiven to the Christian School in Sialkot, Pakistan to help girls and young women, many of them from poor and underprivileged backgrounds (see link1 & link2) as part of the Church of Scotland Millenuim Promise Appeal and £2,000 to CHAS in Kinross.

The windows were dedicated on 9th January 2000 by the Right Reverend John B Cairns, Moderator of the General Assembly of the Church of Scotland. 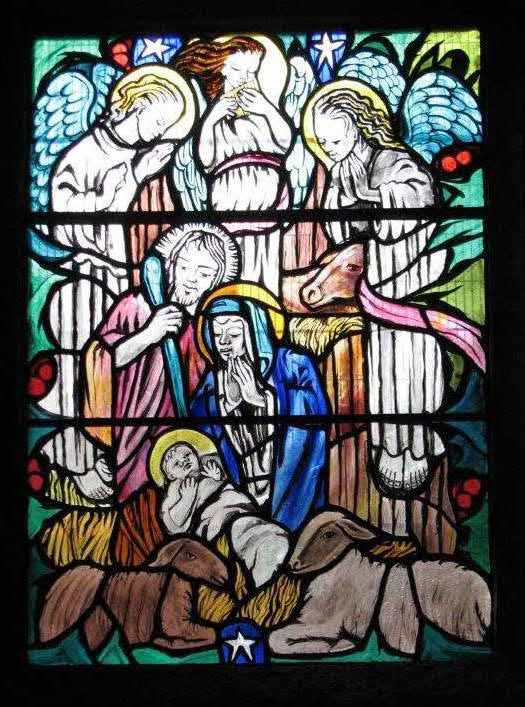 Roland Mitton described the design process – “The Nativity is such a universal story that it is difficult to include all the elements and symbols of that event into one small window. I remember on starting the job- toying with the idea of including symbols but less in the way of figurative portrayal in the window- this would have produced a novel but unacceptable design- the vision of the Child, Mary and Joseph as ordinary human beings had to be the centre of this event. This also means that the traditional elements of the stable, animals and setting of the stalls and the straw have to be included. I also decided that the angels be featured as individuals looking on the Child in rapt fascination – except for the flautist angel in the background as an amusing aside! The inclusion of the ‘Star’ is symbolic as is the holly and berries in the border- a portent of Christ’s trials in the future.”

See the Stained Glass page for information of the other windows.